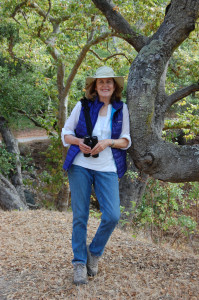 Joan Easton Lentz in the Field. Photo by Jennifer Lentz.

My childhood was spent in Santa Barbara. My parents and grandparents were residents of the area, and my early years were filled with the lore of the outdoor world.  My grandfather, Robert E. Easton, was a rancher and businessman.  My father, Robert O. Easton, was a writer and environmentalist who championed the California Condor.

Growing up in Santa Barbara, I would ride my bike down to the Santa Barbara Museum of Natural History, wander the banks of Mission Creek, and hike the local front country trails with my father and sisters. (Later on, backpacking trips in the mountains of the San Rafael Wilderness led to a love of the backcountry there.)

I was born with a passionate interest in birds.  From a young age, I scoured the backyard of the family home, watching and listening for the birds that fascinated me.  An elderly aunt gave me one of the earliest of the field guides to birds – a slender pamphlet by Chester A. Reed.  The drawings were dim and inaccurate.  Many of the birds described could only be found east of the Rockies, a common feature in early field guides.  When I at last got hold of Roger Tory Peterson’s guide to western birds, I couldn’t believe how much easier identifying the various species became. Bird songs and calls, their habits and plumages, became a part of my growing up, and now, of course, I have shelves full of field guides of all sorts.

Jump forward many years to my life raising a family here in Santa Barbara, where one of the first things I did was to go on field trips with the Santa Barbara Audubon Society.  Because I’d grown up in the foothills, waterbirds were a novelty, and I eagerly absorbed all the knowledge I could from local Audubon leaders.

In the 1970s and ‘80s, Santa Barbara and all of Southern California had become a magnet for a new wave of young birders who treated birding as a serious quest, not just something to do while watching feeders in your backyard.  I learned so much from these birders, and I, too, aspired to be a decent birdwatcher in the field.

One of my earliest volunteer activities was to become a Docent at the Santa Barbara Museum of Natural History.  My father was always going down and pestering the curators there whenever he encountered something in nature that he was curious about.  And I began to acquire the same habit!  The Museum was a great source of information on all aspects of the natural world, and I loved being there and getting to know the curators.

In the early 1990s and through the early 2000s, I was on the Board of Trustees at the Museum, and became a Research Associate in the Vertebrate Zoology Department.

My book “A Naturalist’s Guide to the Santa Barbara Region” was sparked by seeing visitors come to the Museum searching for a general guide to the region.

My most recent writing project was “Story of A Santa Barbara Birder,” described on the main webpage. A health challenge prompted me to put into words how much birds and nature have affected my life in every way. This latest book is a personal account of my journey, in which I found solace and healing in birding and the outdoors.