When I first contemplated returning to visit this Greek island in the Mediterranean, it was to see the marvelous Minoan ruins at the palace of Knossos.  Having visited briefly in the 1980s, I remembered the beauty of the landscape and the wondrous archaeological finds. 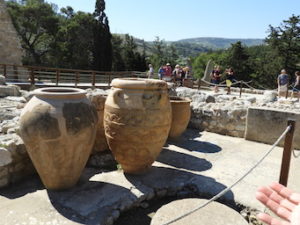 Ancient history is one aspect, but when I recently started learning about the natural history of Crete, I was hooked.  This was to be my next overseas destination!  Upon arrival in Heraklion, I visited the Natural History Museum of Crete. The exhibits are great, and I bought a good introductory book: “Crete: A Continent in an Island”, by Demos Tsantilis (2015). The more I studied the geology and the flora and fauna, the more I realized striking similarities with our own California, which has often been referred to as a “Mediterranean island.” 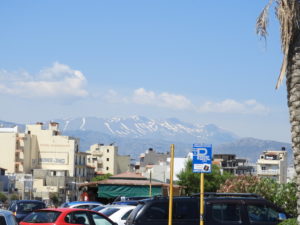 Crete, like California, has a turbulent geologic past.  It’s located where two continental plates collide – the African and the Eurasian–giving birth to volcanoes and frequent earthquakes.  As a result of geologic upheaval, the topography is one of high, rugged mountains and steep gorges. 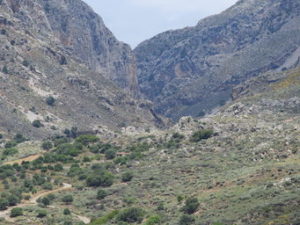 The island has what they call an olive tree climate – a Mediterranean climate –symbolized by the narrow belt of conditions where olive trees grow best. California, too, being located on the west side of a continent between the 30th and 40th parallel shares this rare climate zone.

The most unexpected discovery was Crete’s unique vegetation.  Plant life on Crete is diverse.  The sheltered gorges harbor many endemic species. 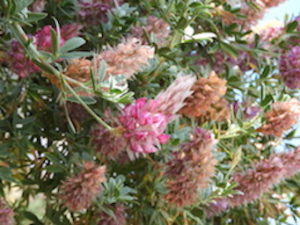 African and European influences on the vegetation give rise to other endemics found only on Crete.  And, being a crossroads for centuries of the comings and goings of people, non-native plants are found everywhere, too.

I had never heard of the term PHRYGANA.  This type of vegetation grows on poor, rocky limestone areas anywhere from the coast to the highest mountains.  The most common plants of phrygana are thyme (Coridothymus capitatus), rock rose (Cistus creticus), sage (Salvia triloba), and Hairy Thorny Broom (Calicotome villosa). 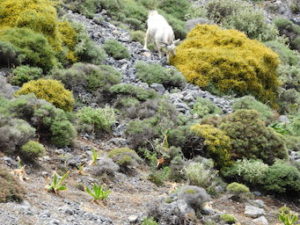 In sum, the majority of Cretan flora is a result of adaptation to two phenomena:  the presence for millennia of humans and their livestock, and the rigors of a Mediterranean climate similar to that of ours in Southern California:  short wet winters and long dry summers.

My first morning in Panormo, the tiny port town where we stayed for a week, I took a walk up a dirt track that wound up to a light on the headland. 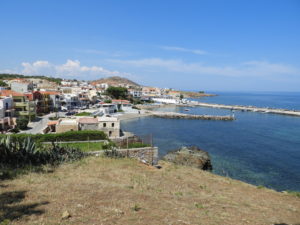 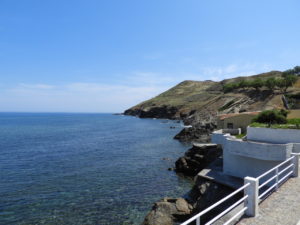 The trail leading up the steep cliff just east of Panormo 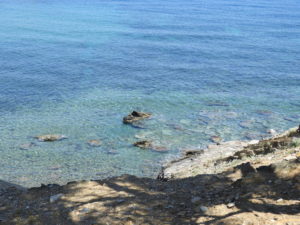 View of the sea from the cliff trail

Never have I seen so many species of plants with armor, except in our Sonoran deserts where cacti rule.

The rocky hillside was not one where you wanted to wear shorts or get off the track.  Wicked thistles, long spines, tiny thorns, hidden tap roots—these plants had defensive  adaptations to the max. 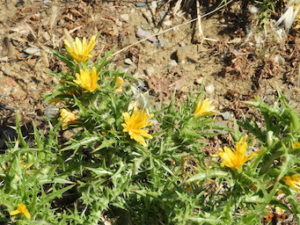 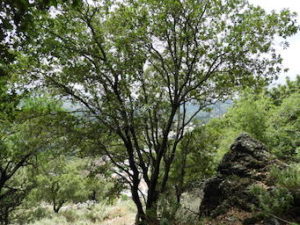 Prickly-Oak, the most common oak on Crete 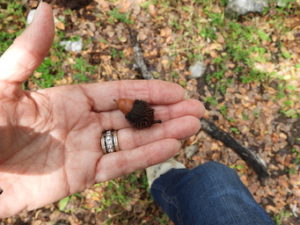 But to be perfectly honest, it was the BIRDING that drew me to Crete!   The island is a major stop- over for a multitude of bird species migrating from wintering grounds in Africa to northerly breeding areas in Europe.  And the same happens in reverse in fall.  So once again, like California, you have a location on a major flyway where anything can drop in if you watch and wait. Crete is well-known for its birds of prey. 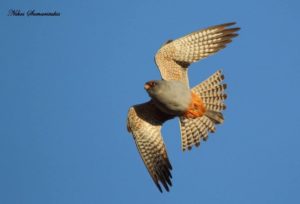 Most are migrants, dashing through the gorges and flying high in the clouds overhead.  A few are residents, such as the Common Buzzard,  Eurasian Gryphon Vulture, Bearded Vulture (Lammergeier),  Bonelli’s Eagle, and  Golden Eagle. 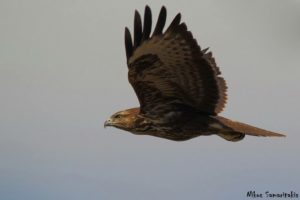 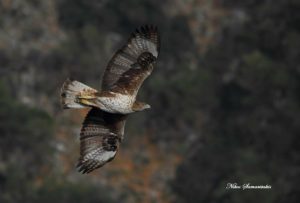 About 87 species of birds, including raptors, come to nest on Crete.  However, the total list of birds to be recorded there is 365, such is this island’s importance as a migrant flyway. 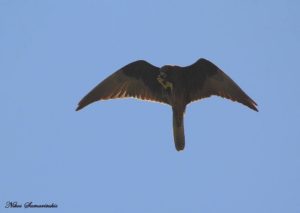 Eleonora’s Falcon postpones breeding until late August, in order to catch and feed its young the songbirds that migrate south in fall from Europe.   In spring, however, the falcons do not go immediately to their nesting grounds, but wander about –often in loose groups — feeding high above the treetops on insects.  I was taking a risk that I would  be able to find Eleonora’s Falcon — the rocky islets of Greece sustain up to 80% of the Mediterranean population of the species–but I hadn’t realized the difficulty of looking for a bird with no established pattern of behavior during my very short visit. In the event, 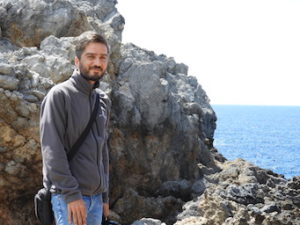 I enlisted the help of top birder and photographer, Nikos Samaritakis, who’s one of the few active birders on Crete.  His bird photos, which he generously provided for this account, are of professional quality. We were to set out on Saturday, May 27, to go birding. 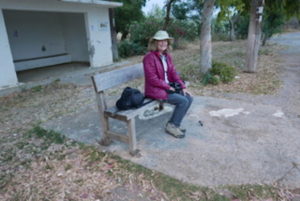 Waiting for the express bus to Chania at 6 a.m., where we were to begin our birding day

After a sleepless night of anticipation on my part, I caught a public bus to get to the west end of Crete.   Suddenly, I noticed the bus driver had turned on the windshield wipers — it began to pour rain. My heart sank.  It couldn’t rain on my birding day.  And I got lucky, because a couple of hours later, the sky was clear and blue, but the next day — it poured and poured.   (I learned Crete had had, like California, a wet winter, and this was the last of the spring storms.) 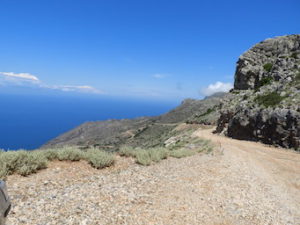 The view from the Rodopou peninsula out to sea

I was traveling on a bus to western Crete because here, where two promontories of land extend like fingers, were the high ridges over which we might see Eleonora’s Falcon flying, since the breeding grounds are nearby on islands difficult to get to. All day we went birding–Cretan style:  Nikos driving at break- neck pace through narrow village streets in his little car, his sharp eyes always on the horizon, and me already having fun ticking off life birds:  Red-rumped Swallow, Cretan subspecies of the Eurasian Jay, 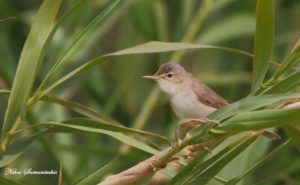 Olivaceous Warbler singing like crazy at the top of a Giant Reed (the dreaded Arundo donax so prevalent in our riparian areas in California.)

Then down to the estuary of the Tavronitus River, where a Little Ringed Plover flew by, as well as a Little Stint. 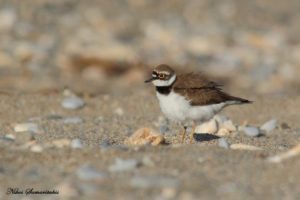 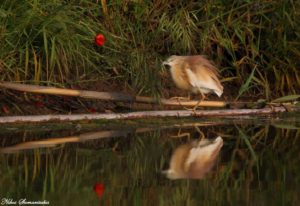 My life Squacco Heron, a lovely heron with peach-colored plumage, stood near a pool poised in hunting mode. But it was time to get serious about the falcon, so we headed out to the two promontories, the Rodopou and Gramvousa peninsulas.

This wild, windswept country was fabulous.  High on a ridge overlooking the blue Mediterranean, we bumped over rocky tracks, stopping to see Woodchat Shrike and Black-eared Wheatear – both new for me–and always we scanned the sky. 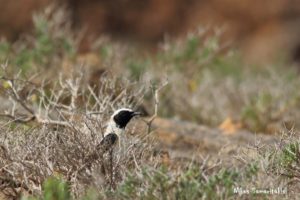 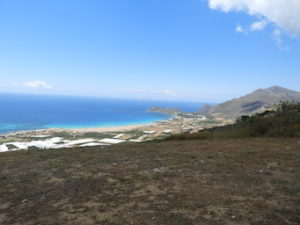 Then it was out to the Falasarna ridges atop the most westerly of the two peninsulas.  We stood high above the agricultural operations down on the coast, scanning the marled limestone formations and then looking up to the white puffy clouds in the sky:  Gryphon Vulture, Common Buzzard, even Peregrine Falcon, we saw all of these but no Eleonora’s. The day was beginning to fade away, and so was my energy, so we decided to drive inland to a freshwater reservoir – Agyia. 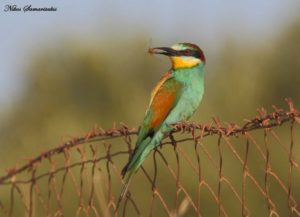 European Bee Eater, so beautiful and easy to see 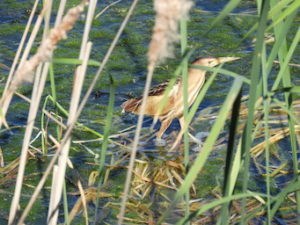 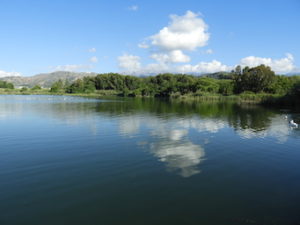 Nikos had seen the falcons catching insects above this lake recently, so we thought we’d give it a try. I loved birding this spot.  It was so peaceful, and we got great views of Little Bitterns both male and female in the reeds, also Common Moorhen, and other waterbirds.  I sat down with a Capuccino Freddo, my favorite energy drink, and I just knew we’d see this bird I wanted so badly. And we never did.

Despite heroic efforts, Eleonora’s Falcon never flew through my binoculars. But the natural history I learned about Crete, the immense steep mountains, the charming villages, the friendly people, how could I not return some day? Some fine day when a fisherman has taken me in his boat, and, as he cuts the motor, I stand rocking back and forth.  I look up at the sheer cliff on which that swift falcon perches, guarding her nest–fierce and defiant– and there, in my binoculars, I will see Eleonora’s Falcon!