Today’s plan involves driving south of the Pyrenees to an entirely different habitat.  This is where Alberto lives, in a little town surrounded by agricultural lands. 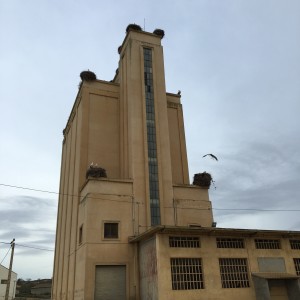 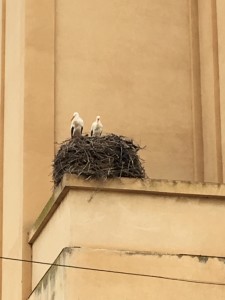 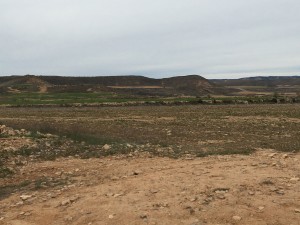 Monegros Steppe on a rainy day

The whole area has been termed the Monegros Desert, a semi-arid zone nearer to Zaragoza than to Huesca, but still in Aragon.

I am looking for a suite of completely new birds today:  sandgrouse, owls, larks – and neither Alberto nor I forget that I still don’t have Lammergeier, the greatest vulture of them all, so we’ll have to return here to look for it at the end of the day.

Lots of driving!  But this new area is fascinating!

Besides, rain is threatening, the sky darkens and lowers.  It’s a good thing we did our montane birding yesterday.

The true Monegros habitat survives in bits and pieces, surrounded by barley and wheat fields.  If left without irrigation, the soil here endures salinity and dryness.  Small, aromatic shrubs and the taller, feathery Ratama  comprise the Monegros steppe vegetation.

A harsh land, yet with a certain beauty all its own.

Our first target:  the stately Eagle Owl.  Alberto shows me a ledge of gray rock, sets up the scope, and I see the gray-brown shape of the enormous female as she sleeps, her body leaning against the side of the miniature cave she’s chosen in which to produce her young year after year.  She looks as big if not bigger than our Great Horned Owl. 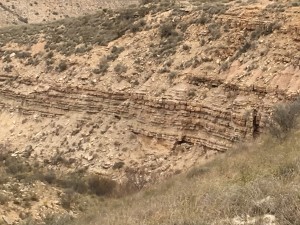 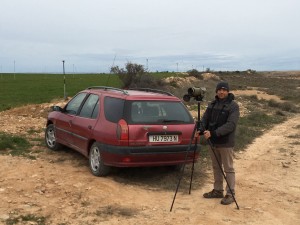 Alberto in the Monegros Steppe

We drive on, entering now one of the few remaining natural areas that’s been set aside by the European Union, in order to offset the encroaching agricultural fields.  But the fields produce many jobs, too, and that’s an issue here.

Alberto slows the car to a crawl, so as not to flush the larks.  Larks frequent this country of shrub-steppe.  They whirl up, hover, sing on the wing, then land on top of a nearby bush.  The larks are big – nearly the size of our Western Meadowlark. 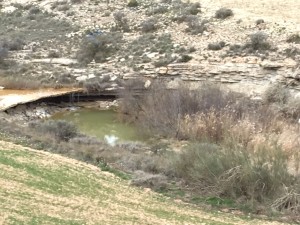 A pool of water in otherwise dry terrain

We approach a tumbled down stone farmhouse, and RED-BILLED CHOUGHS fly up.  These deserted structures are now used for nesting by owls and other species.  I hear the whirring of wings and a group of four BLACK-BELLIED SANDGROUSE fly over.  The life birds are coming fast now.

Terrific views are had of Little Bustard, which I’ve seen in France, but never as well as this.  One of our targets proves as impossible to achieve as we suspected:  Great Bustard.  There are so few of them left now, with the cereal crops taking over.

We did see STONE CURLEW and DOTTEREL, both shorebird migrants that were new for me.

It’s raining pretty hard.  And, since we’re driving Alberto’s other car, which is older and better for these rough roads, one of his windshield wipers isn’t working!  He peers sideways out the front of the car and I try not to worry.

In the distance a few stray Olive trees and Almond trees break the horizon.  Alberto heads for them, mumbling something about GREAT SPOTTED CUCKOO.   Now that’s a nice bird.  They’ve just arrived from North Africa, and they parasitize magpies.  So, they’re lurking around, trying to stay camouflaged in the few trees available.  No magpies visible, but perhaps we can find the cuckoo?

Alberto slams on the brakes, gets out of the car, grabs the scope, and points to the top of an Almond tree.  In the rain, there’s the cuckoo, that rascal – so big, with his white spots on a gray background.  Perfect for cryptic coloration as he sneaks around; his mate the same, well-suited for laying eggs in other birds nests. 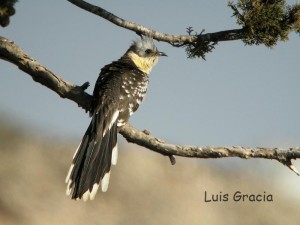 As the rain comes down, we drive out onto a main road and stop for a coffee.  We need it!

One thing about Alberto:  he never gives up.  We drive endlessly searching for Great Bustard, but it’s not to be.  We do find LITTLE OWL, perched up in one of the ruined stone farmhouses.  Nice!

O.K.  So it’s back up to the foothills of the Pyrenees now, as the mid-afternoon sun comes out and the clouds fade away.  We have to try for Lammergeier!

One of the reasons Alberto took me yesterday to Salto de Roldan was to make good on his promise of being able to look down upon the GRIFFON VULTURES as they came in to roost on the ledges beneath where we were standing.

And this afternoon, while scanning for Lammergeier, I have a chance to watch Griffon Vultures as they come into a communal roost on a rock ledge.   These vultures are social, both in and out of the breeding season.  They nest in loose groups of several pairs, each with their own nesting platforms on the steep rock faces of the Mallos.   The whitewash beneath the nest marks its location; the birds haven’t split off for the breeding season yet, though. 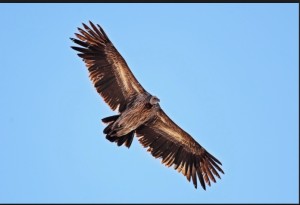 No Lammergeier.  The evening is approaching fast.  Am I going home without it?

This morning, Josele Saiz decides to help me look for the Lammergeier.  How marvelous of him!

Gib drives, and we three ride up along a spectacular road that follows a gorge to the dam at Embalse de Vadiello (Vadiello Reservoir).

I want desperately to see this largest of European vultures, the Lammergeier; the name means “bone eater” in German—the bird eats the bones of its prey in order to get at the marrow.  Here in the central Pyrenees, Lammergeier is very scarce, with only two breeding pairs in the area (500 pairs in all of Europe).

Vultures, including Lammergeier, frequent these cliffs

I follow dutifully as Josele gets out of the car and starts walking across the dam.  This is how you get the  most exposure to the skyline, he explains.  And he seems to have eyes in the back of his head, because suddenly he yells “LAMMERGEIER!  Look, flying across that cliff face!” 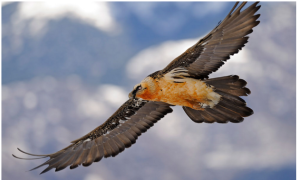 And I see it!  Yes, this magnificent vulture with a huge wingspread, long tail, and a suffusion of orange on its underparts.  The morning sun highlights the Lammergeier against the blue sky as it makes its journey to its nesting place, far beyond this ridge.  Josele knew it would be coming to make a nest exchange about this time in the morning!

“Never take your eyes off the sky!” he says, as I try to catch my breath and thank him profusely.

Hmmmm.  I wish that was all it took to be a good birder.  But in Spain, on my birding adventure, I have to agree that he’s absolutely right.

I collected 19 life birds during my stay at Boletas!