PART ONE:  THE PYRENEES

We’ve arrived at a 15th Century farmhouse in the village of Loporzano, located in Aragon at the foot of the Pyrenees.

This is Casa Boletas Birdwatching Centre, our home for the next three days. 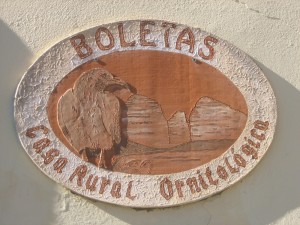 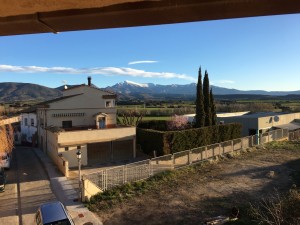 We’re welcomed by proprietors, Josele Saiz and Esther Diago Millan.  Esther (pronounced “Estair”) prepares marvelous homecooked meals, and Josele is the master tour guide.  He mostly leads tours outside of Spain these days, but he’s assigned his longtime friend, Alberto Bueno, to be my guide birding around here for two days.

Alberto is the best.  So friendly, knows the local birds like the back of his hand, speaks English, and drives me in his car!  The perfect birding vacation.

I’m sitting grabbing a last cup of coffee at the long dining room table at Boletas.  A knock on the door means Alberto has arrived.

I’m determined to go for the highest mountain birds first:  those found at the Astun Ski Resort at the very top of the Pyrenees.  My targets:  Snowfinch, Alpine Chough, and Alpine Accentor.

Winding upwards, the road leads us higher and higher.  We approach Somport Pass, between Spain and France, elevation 5,380 feet.  The temperature feels much colder than 25 degrees F.   My California blood is FREEZING — as we get out of the car in the middle of driving snow and walk gingerly down towards the front of the resort.  The snow and ice are thick, but Alberto bears the spotting scope fearlessly forward. 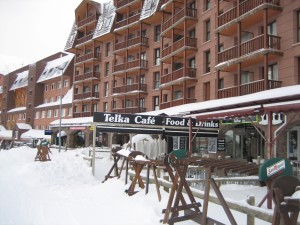 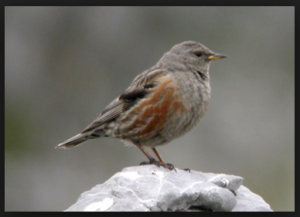 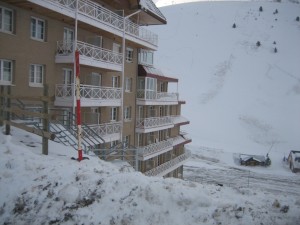 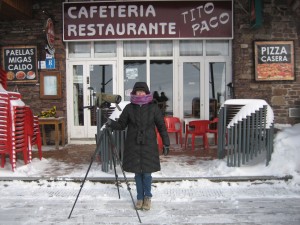 At last, we take shelter in the cafe and warm up while observing the birds.  Everybody stares at us.  Skiers are curious as to what we are doing here.

When Alberto tosses a crust of bread on the snow bank nearby, an ALPINE ACCENTOR and two ALPINE CHOUGHS come swooping down.  Alpine Chough is like a miniature crow, with a bright, yellow bill. The Accentor, a small sparrow-like bird, hops around oblivious to the Arctic conditions.

Alas, one of my special wants — Snowfinch–was nowhere to be found.

So we leave the snowy heights and drive down, down the Pyrenees to visit the mountain town of Jaca  (“haca”).

Here, Alberto brings the car to an abrupt halt.  Looking up, I see my first RED KITE and then my first EGYPTIAN VULTURE!  Beautiful! 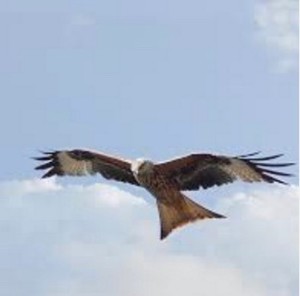 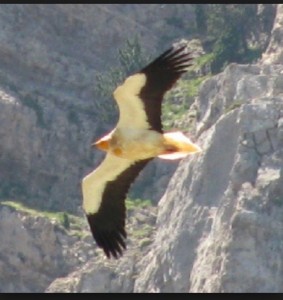 The Egyptian Vulture has just arrived from North Africa. They breed here in the Pyrenees.  Amazing wedge-shaped tail as it goes soaring overhead.  This is the land of soaring raptors; they love the north winds that whoosh down the mountains making great up-drafts.

I have never been so cold!

To the south, looming above us, is a great massif.  At the summit, we stop at San Juan de la Pena, a fancy resort with nobody around. It’s sunny, but snow lies on the ground as we wander through a deserted campground. 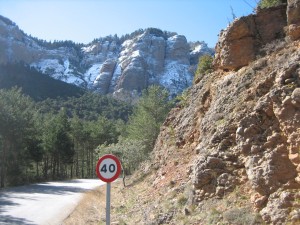 Never underestimate Alberto.  He grabs his phone and lets fly a racket of a woodpecker call.  Suddenly a large BLACK WOODPECKER — a male, swoops in and lands on a tree trunk very close.  How lucky can we get?  We are on a roll! 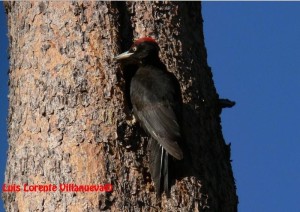 Meanwhile, in the back of my mind, I’m thinking:  ” WHERE’S THE WALLCREEPER?”  (“Treparriscos” in Spanish).

Yay.  Alberto proclaims the Treparriscos is next on the agenda.

We drive down, down again into a gorge, and I see in the distance what I’ve been waiting for — the red limestone cliffs of the “Mallos” formations at the town of Riglos! 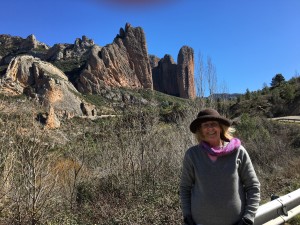 En route to Riglos and Wallcreeper! 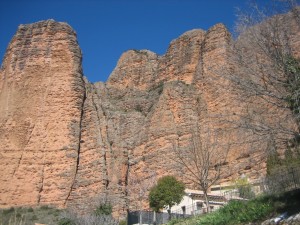 Lunch is by the church in the hamlet of Riglos.  Great cliffs loom a thousand feet above us, and we hear the sound of rock climbers calling to each other.

I flew many miles to get here and I can’t imagine finding this tiny bird on such a vast rock face!

Alberto says:  “Look at the lower third of the cliffs.”

I examine every crevice. You’ve got to be kidding!

Some of the cliffs are red, some are gray — the exact color of the little gray Wallcreeper.

After an hour of scanning, Alberto spots it.

At last, at last, there’s the bird, and I get it in the scope — a fabulous gray bird behaving like a nuthatch, hunting methodically up and down the cliff face.  It creeps in and out of moist cracks in the rock, often out of view for minutes at a time. 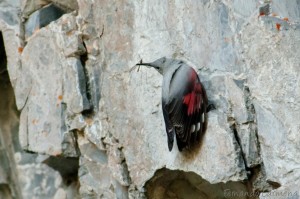 And when it flies, you see the crimson wings!  Never have I been so happy!

Two minutes later…..GONE.  The Wallcreeper flew purposefully off across the rock facade and disappeared.

Exhausted, elated, we walk back to the car.

Alberto has an idea of a place we should try for Lammergeier this afternoon.

We’re climbing again, this time up to an amazingly steep, windy precipice.

Alberto leads the way along a narrow trail.  The underbrush is full of spikey shrubs and junipers.  The strong wind tears at my parka.  I’m unsteady!  We’re so close to the drop-off below.

In the distance, the gorge of the Flumen River cuts deep. The rivers here feed into the Ebro River, which culminates in a famous estuary along the Spanish coast. 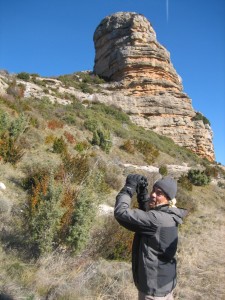 Soon, we’re joined by a friend of Alberto’s, a young biologist who’s monitoring the nesting Bonelli’s Eagle.  She’s on a nest so far away that even the powerful scopes can barely pick it up.

The guys are set up 20 feet downslope from me, but I’m scared to scramble down and join them.

Come on, Joan.  You can do it.  I decide to give it a go and carefully pick my way down the steep, rocky hillside. 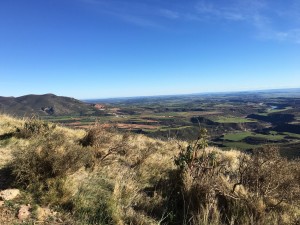 The view from Salto de Roldan 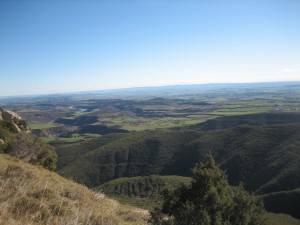 The far away view of the female Bonelli’s on her nest is my reward.  Too distant to really i.d., but I’m thrilled.

This is my wild Spanish birding trip, and I love it!