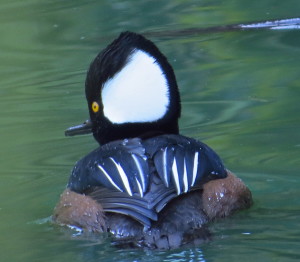 I don’t know of any other Christmas Bird Count in the country that has quite the unique qualities of Santa Barbara’s. Why?

Of course, we have the mild weather, which is shared by many of the states in the southern portion of the U.S., providing food and shelter for wintering birds.  But hey, why are we still ahead of Counts in Florida, Texas, and coastal Southern California when the totals come in?

First, we have a fabulous corps of dedicated local birders that communicate with each other year round.  Our listserve, sbcobirding, and the increased use of E-bird –both contribute to this sense of shared knowledge.

Second, we attract former birders who used to live in the area, but who faithfully reappear every year to join in the CBC effort.

And, lastly, and probably most important of all — we have a super team of leaders that organize and compile our Count, contributing months of time and energy to this enormous beast — the S. B. CBC!

So, how do you know what birds to expect and how do you prepare to cover a circle  centered at the corner of Foothill Rd. and San Marcos Pass, and fanning out to a radius of 7.5 mi. in all directions?

Let me give you an account in real time:

Dec. 20:  I am in charge of the Montecito portion of the CBC, so, like about 9 other section leaders, I must try my best to scout the area before the Count.

People don’t realize how important scouting is.  You see, wintering birds pretty much stay put, once they arrive here for the season. So, if we know of a rare or unusual bird that has been seen previously, we can go get it on the list on Count Day — Saturday, January 3, 2015.

OK, so I’m supposed to wander aimlessly around Montecito doing what?  Peering into people’s backyards?  Sighing with despair as formerly productive locations prove disappointing due to leaf blowers, construction, or drought?

Hmm.  I have to admit that Montecito is a challenge because we have so much habitat, and most of it is on private property.

At least there’d been some rain, so a few of the Eucalyptus were in bloom, always a source of food for orioles and tanagers.  Also, the orange Cape Honeysuckle that is found as a hedge attracts hummingbirds and warblers.

And the Varied Thrushes!  It was an irruption year.  They were everywhere on shady, damp lawns and in moist thickets.  These beauties from the Northwest, which rarely winter this far south, were all over.  So that was fun.  I think in one region — Hope Ranch — a participant counted 96 Varied Thrushes, and there will be totals in the hundreds for this species when the compilation is complete. 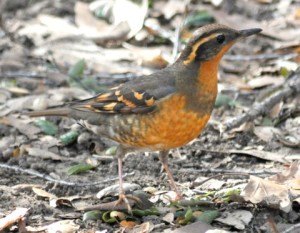 But back to scouting.  First, you drive around, hitting the spots that delivered good birds in the past.  I  get out of the car at a likely looking sunny hedge or pine tree, clip my dog, Happy’s leash, to my fanny pack and walk quickly from one place to another, binoculars poised, ears alert, listening for the chatter of an oriole or the “thrup” of a tanager, or any sound that I don’t recognize.

In scouting, you’re looking for “birdy” places that you might revisit on Count Day, and of course, you hope to spot a rare or unusual bird as you go from street to street.

Dec. 29:  OK, then. Christmas is over, the family is gone, the shopping and eating and decorating and undecorating is OVER!

Yay!  Time to kick it up a notch and get going on some new spots to investigate for birds.

This year, I asked the Montecito Country Club staff for permission to take a golf cart around to scout for birds.  What a blast! 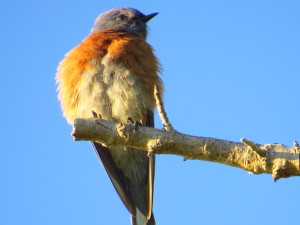 I went with Mark Holmgren and we actually found TWO great birds that we hoped to get on the Count:  a Summer Tanager, and a brief glimpse — oh so brief — of a nighthawk of some kind.

We’ll be back on Count Day to refind these two goodies.

Dec. 30:  A very rare bird is found today by 11-year old Lucas Gaede, out by Lake Los Carneros:  a Nelson’s Sparrow, which many folks get to see. Alas, on Count Day it was nowhere to be found. 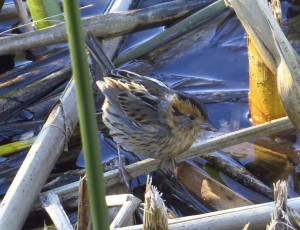 Jan. 1:  Out-of-towners have arrived early to scout, and the number of different orioles and tanagers they spot is amazing.  I am jealous of Goleta.  South Goleta, along the coast, is one of the prime locations for bird finding in our Count Circle.

Isla Vista, Devereux Slough, and the UCSB campus are famous for their rare birds!

Jan. 2:  The day before the Count is always a frantic one, especially for the chief compilers.  Rebecca Coulter, our head honcho, is cool, very cool.  (As a former compiler myself, I don’t know how she does it!)

Jan. 3, 2015:  It’s chilly as I walk outside at 7 a.m., but I am so grateful not to be one of the birders assigned to count owls!  Those poor individuals get up at midnight and spend most of the night trying to locate owls up along East Camino Cielo and in the foothills.

But the day is cool and clear and calm — perfect for birding!

And so many birds hopping, singing, foraging, calling!  I love counting all the common birds, because many species are doing just fine.

As the hours tick by, I am able to tally quite a nice list of a variety of birds.   (I saw or heard 7 Varied Thrushes, for example.)

Thank goodness there were several other groups helping count in Montecito, including Joan Murdoch, one of the Count Compilers, and my friends, Carol Goodell, Marilyn Harding, and Jean Okuye.

By the end of the morning, a pair of Scott’s Orioles had been seen–exciting stuff!

At 2 pm on Count Day, I met Hugh Ranson, a great birder who’s from Wales — he’s lived here many years — and we hopped in the golf cart and away we went on the MCC course.

The Summer Tanager was NOT where it was supposed to be.  We tried everything to coax it out of the trees where I’d seen it previously.  Oh well…..

But wait!  At 4:30 pm, when the sun was getting low, we suddenly saw the Summer Tanager fly into a different tree near the clubhouse.  Yay! 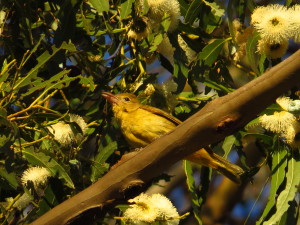 Then came the tricky part:  the nighthawk.  We had several of our friends staked out on all sides of the clubhouse and out on the grass nearby, hoping to catch the brief glimpse we needed as this secretive bird would fly immediately overhead and disappear to hunt for insects at dusk.

The moon came up full and beautiful.  A bride and groom were having a wedding party in the Montecito Country Club, and elegant young couples were strolling about.

But they didn’t notice a bunch of ratty-looking birders, as we stood gazing up at the sky and shivering in the evening air.

Hugh, ever up for helping, said he’d go down to the Bird Refuge to see if the nighthawk was there.  At the Bird Refuge, he heard a Virginia Rail calling, which turned out to be the ONLY ONE on the Count!  How lucky was that?

And so the day ended in Montecito, and the scene switched to the Compilation Dinner at the Santa Barbara Museum of Natural History.

If you ever want to see over 180 birders in one room all talking at once, come to the Compilation Dinner!

This is where you learn what birds were seen, and how many species were counted.  OF COURSE, this is not a competition, but we do care about our total of birds seen in the last 24 hours!

So we quiet down and listen to Rebecca Coulter, as she calmly recites the list of birds we might have seen, and the evening progresses.

One of the really good birders, my friend Paul Lehman, enjoys predicting the number of species we’ll end up with.

He wrote the number on a napkin and handed it to a Larry Ballard.

Yup.  That was the number we ended up with, in a year when a lot of very ordinary birds were missed but some gorgeous rarities were discovered. 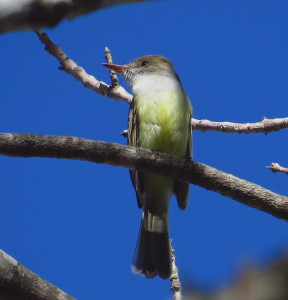 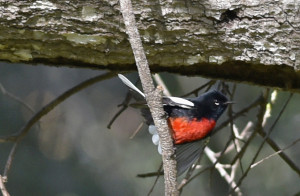 Equally important is the roadrunner that was nearly missed, and the single Red-breasted Nuthatch, and on and on.

Yes, Santa Barbara’s Christmas Count is unique, but mostly, I think we’ll all agree, it’s A LOT OF FUN!