On a cloudy, cool morning, the Wednesday bird class ventured up the coast to Refugio State Beach, a well-known coastal vagrant trap for passerines in fall migration.

As a teacher, I look at Refugio as somewhat of a challenge.  It’s not all that aesthetically pleasing, lots of tree have recently been removed, and drought conditions have made the creek here little more than a stagnant lagoon.

But hey.  You’ve gotta give it a go….every fall….it’s a tradition.

As a group we’re rather large.  This has its advantages and disadvantages. More eyes see more birds, but more people may scare them away.

At the stone bridge, we began to see Yellow-rumped Warblers coming down to bathe and drink.  An Orange-crowned Warbler, several Townsend’s Warblers, and a Nashville Warbler — the best find — appeared and then quickly disappeared.  The birds flew back and forth between the nearby Eucalyptus trees and the willows lining what looked like foul water, but these are thirsty migrants and they’re not particular. 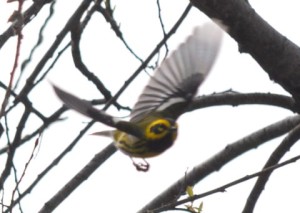 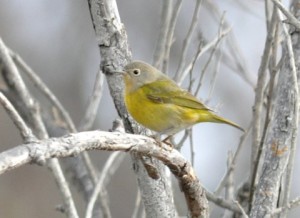 We wandered the campground, trying not to invade the privacy of the campers with our binoculars.

When we got to the west end, we looked offshore to see a small flock of Western Grebes floating in the calm, gray sea.

Wes Fritz, a local professional bird guide, arrived to help us out.  Wes and his super big spotting scope helped with the Royal and Elegant Terns flying by, as well as a big, bulky Common Loon feeding offshore. 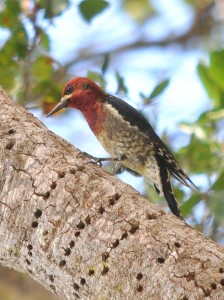 And in the short kikuyu grass growing right near the pavement, we had great looks at a Savannah Sparrow. Totally out of its native habitat of dry open fields, this streaky sparrow was an obvious migrant.   Too exhausted to continue flying, the sparrow dropped down here because it saw a patch of green grass. 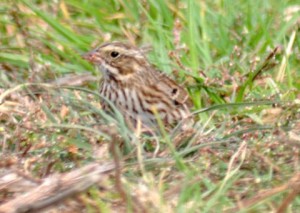 After class, about ten of us accompanied Glenn Kincaid up Refugio Road to see if we could locate the Yellow-bellied Sapsucker he thought he’d seen in a pre-class exploration.

We drove to the second crossing, parked the cars by the corrals there, and walked back south along Refugio Road.

We scanned the willows along the creek, then somebody spotted all the sapsucker workings in a dense cluster of Coast Live Oaks close to the road.

Another Red-breasted Sapsucker hitched its way up one of the trunks. 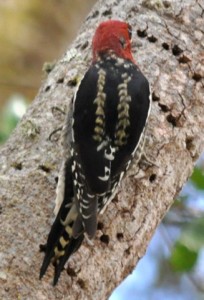 And each time I said I thought it might be time for me to go, I’d run back to the group of birders as they found another bird:  this time it was Carol Rae who spied the juvenile Yellow-bellied Sapsucker way back in the oaks.  But it came closer and closer, began to interact with the Red-breasted, and Wes was snapping photos like crazy. 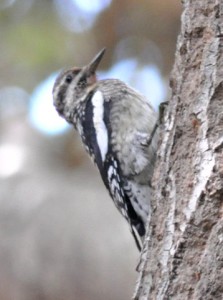 Glenn remarked that the Yellow-bellied was NOT the bird he’d seen early that morning (someone else had seen a Red-naped Sapsucker, so that’s probably what Glenn saw).

And suddenly, with no warning, without a sound — a beautiful red and black and white warbler was dancing among the limbs of the oak trees!  It flared its white tail edges as it swooped and darted – a vision of a Spanish dancer in the warbler world. 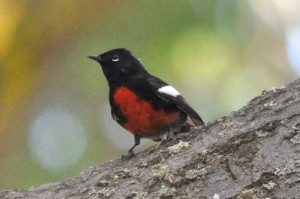 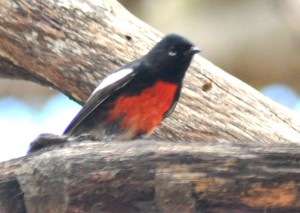 You want migrant warblers, we’ll give you migrant warblers…..but this?  Well, never in my wildest imagination could I have picked this beautiful bird as the treasure that some of us were lucky enough to see. 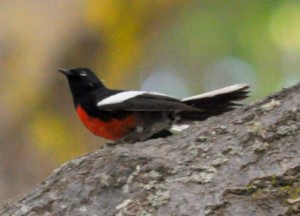 I just wish more than half the class hadn’t gone home, and I want lots more folks to get the opportunity to see this bird.

But from what I understand, it may already be on its way south to Mexico, where it belongs this time of year.

The elusive Painted Redstart had not been refound the next day at this writing.

You just have to love fall birding, don’t you?

(ALL PHOTOS BY LINDA FRAZIER)