Birding from Camlica Hill in Istanbul!

It’s full name is Buyuk Camlica, the highest hill overlooking all of Istanbul and the Bosphorus.  The Bosphorus, that marvelous channel that separates two continents — the European and Asian sides of the city—is a famous route for raptors in fall migration.

I was determined to get up there and check it out. 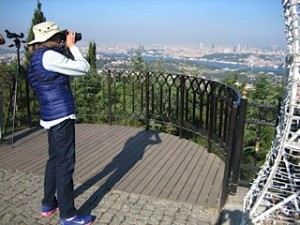 View of Istanbul from Camlica Hill

There was only one problem: our  cultural tour began that morning. But I skipped it, and persuaded my terrific Turkish guide, Ayse, to come with me, caught a taxi from the hotel, paid a taxi driver to make the journey in rush hour traffic, and arrived at the site absolutely clueless as to where to go or what to do.

So here I am, clutching my binoculars, dragging along trusty Ayse, the young Turkish woman who has no idea whatsoever about birds but she’ll be my interpreter, and we get out of the taxi.

We start walking toward the view point–the whole of Istanbul clear and gorgeous lying beneath us–and my heart leaps.

The “line up” of birders

A phalanx of birders manning Swarovski and Leica scopes appears!

I have never been so glad to see a group of weird-looking birders in my life.

Behind us is a little park with a slope of green grass, but most of the birders are all lined up along a fence, after which the hillside drops off steeply.

“Do you speak English?” I say, hesitantly, to the first young man in the “line up” of heavy duty scope-bearers.

“Yes,” he says in an accent, and he explains he’s Swedish, and so are the half dozen others there, and behind them on the grass is gathered a group of Danes. 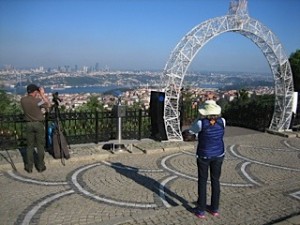 My Swedish friend Michael to the left

The Swedish guy on the end of the line seemed quiet and shy, so I decided to stick by him.  Having no spotting scope, I would never see the birds if I couldn’t look through someone’s scope.

I am eternally grateful that he let me borrow his scope and helped me identify what we were seeing.

I realized that most of the birders touring Turkey are Northern Europeans and they come for a week and go all over Anatolia, not just here.

I had been in touch with the famous founder of Birdwatch Turkey, Karem Ali Boyla, but he was super busy.  He said he’d send his “assistant” up to help me. (But by then it was too late, and I had to go….)

The sky was blue.  Big white puffs of clouds began to build.   The wind was wrong, of course.  Yesterday it had been stormy, so I’d had high hopes for today, but it was too fair and calm.  Northwest or northeast winds drive the hawks and eagles south along this route as they head to their wintering grounds in southern Africa.

We waited and waited.  Nothing for an hour.

Finally, finally, my Swedish friend, Michael, turns to me and says in his heavy accent, “I see an eagle very, very far away,” and I’d read a lot about these Lesser Spotted Eagles and how common they are here in migration, so I was thrilled beyond measure to see this tiny speck with the floppy wings in flight as it made it’s way far, far in the distant clouds and headed eastward. 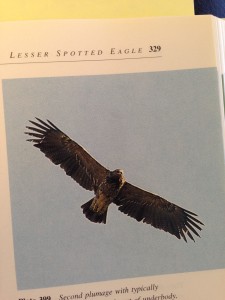 Pretty soon, these amazing birders would get onto a bird far away and they’d try to describe its location — of course in Swedish – and I knew they were giving directions for spotting these distant specks, but I couldn’t understand.

Eventually, somebody calls out “Two Booted Eagles!” and points way up there where that blue break comes between the two white clouds, and I look through Michael’s scope and see what looks like a brown speck with heavy fingered wings soaring.   No way could I i.d. these eagles on my own!

And then comes the highlight: a flock of FIFTY Levant Sparrowhawks (like our Cooper’s Hawks) appear high, high up all flying together like a gathering of swifts.  I’ve never seen hawks flying in such a tight kettle before and then they are up and twirling and whirling away, disappearing to the east out of sight.

More and more eagles soared as the thermals heated up and the morning wore on.  Michael pointed out a Black Kite and a Pallid Harrier.

But how exciting.  I can’t believe I’m actually here!

During a lull I ask Swedish Michael where was home.  He said he lived on Gotland, which is a large island south of Stockholm, and when I asked him what he did he said he was the janitor for a twelfth century church on the island.  Could this be true?

Moreover, Gotland is also the home of Lars Johnsson, perhaps the most renowned bird artist alive today – certainly in Europe.  I treasure a little guide book I have of his, but  he mostly does paintings now, according to Michael.   Wow! 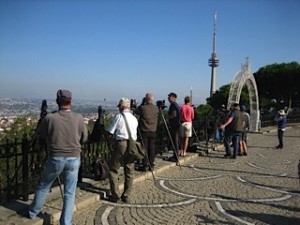 So that was my experience at Camlica, and although it wasn’t the Big Bang, it was the Little Bang and that’s better than no bang at all.

I’ll take my Lesser Spotted Eagles by the 5s and 10s, if necessary, and my 2 Booted Eagles, and my 50 Levant Sparrowhawks.  And yes, I heard about “Oh you should’ve been here yesterday, there were 5000 eagles going over and you could see them easily!”  And then I learned about the Italian birding group that simply lay down on the grass and counted the eagles as they passed directly overhead.

This was good enough for me.  So I thanked Michael, and gave him my e-mail and I hope I will have the karma to pay it forward to some other struggling foreign  birder if I come across one back home in Santa Barbara.